When IT consultant Jay Daniel was asked to find a new, more affordable phone system for a McDonald’s franchisee with 20 restaurants, he knew what to look for: a fully hosted solution with predictable monthly costs and highly reliable uptime. 8x8 fit the bill, and now the client’s phone bill is 35% lower while uptime has never been higher.

Contrary to popular belief, VoIP phone service isn’t always cheap—you have to pick the right provider. That’s the reality IT consultant Jay Daniel faced when a McDonald’s franchisee in Nashville, Tennessee asked him for help back in 2010. Although phone service for the franchisee’s 20 restaurants was being hosted by a local Internet Service Provider (ISP), costs were out of control and downtime was a constant problem. With the service contract about to end, the franchisee asked Daniel to recommend a replacement system.

In Daniel’s view, the McDonald’s franchisee was not getting the best deal from the local ISP. He was renting outdated Cisco phones for $20 a month and paying per-minute charges for toll and long distance calls. In fact, Daniel estimates he was only saving about 20% over the cost of traditional copper lines.

“The restaurant owner was paying too much and not getting a lot for it,” says Daniel. “The local ISP had taken advantage of the fact that he was not tech-savvy.” 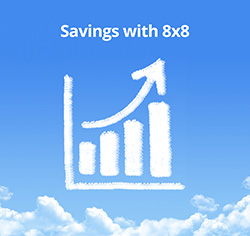 Having worked with a number of different VoIP providers in the past, Daniel quickly came up with a short list of candidates for the replacement system. 8x8 was one of them. “For this client, I liked the idea of a hosted solution,” explains Daniel. “I knew it would help them keep their TCO [total cost of ownership] down.”

In considering bids from two other VoIP providers, he soon discovered deal-breakers. The first company wanted the franchisee to maintain service via SIP trunking, which would significantly increase TCO and not be cost-effective. The second company offered only metered service, which would make the franchisee’s phone costs unpredictable.

“8x8 won out because of the numbers,” says Daniel. “Their fees were lower and consistent from month to month. It was a much better cost structure for a franchisee with 20 restaurants distributed across two counties.”

Although the McDonald’s franchisee only needed standard 8x8 service at the restaurants, there was a challenging complication: the 20 sites had more than 80 telephone numbers from over a dozen different providers! All of these numbers had to be ported to the 8x8 system, while incurring as little downtime as possible for the restaurants.

“8x8 managed the number porting for us and they did a beautiful job,” says Daniel. “There was very little downtime, and the whole process was smooth as ice.”

Within 12 weeks, all the restaurants’ numbers had been successfully ported over to 8x8, and by January 2011, all 20 restaurants had moved to 8x8 service.

Since switching to 8x8, the franchisee’s phone costs have gone down 35%, which is less than half the cost of traditional landline service. Downtime has also been dramatically reduced.

“We used to have at least one restaurant down every single day,” says Daniel, who has continued on as IT director for the franchisee. “Now we have the most uptime of any McDonald’s franchise in the Indianapolis region, which includes the greater Nashville area.”

Restaurant environments are notoriously hard on IT equipment. McDonald’s managers use high-quality desk phones in their offices, but out on the restaurant floor, cordless phones are a must.

The local ISP had used analog adapters that were not robust and did not deliver good voice quality. Daniel and the McDonald’s franchisee were pleased to find that 8x8’s analog telephone adapter (ATA) technology works very well.

“With 8x8’s ATA adapters, we can purchase inexpensive phones and fax machines for the restaurants and then replace them as needed,” says Daniel. “The adapters are very easy to use—we just plug them in and they work! The voice quality is also much better than we had before.”

“Our restaurants are busy and can’t typically return calls, so we disable features like voicemail and call waiting on our main public numbers,” he explains. “Before, it was either impossible to deactivate those features, or we had to go through the ISP to do it. With 8x8, we can set up our own configuration directly, without waiting for outside help.” 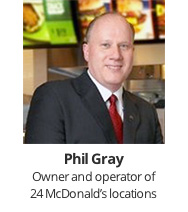 In October 2013, Phil Gray purchased the McDonald’s restaurants from the previous owner. He now has 24 locations, and plans to further expand the franchise. Thanks to 8x8, the ramp-up time for new locations is just a few days.

“About a week before we’re due to open a new location, we go to the restaurant site and plug in the ATA adapters,” Gray explains. “Once we confirm they’re working, we know we’re ready to go.”

These days there’s a lot of buzz about ensuring a good customer experience, but Daniel likes the fact that he rarely has to ask for support.

“Our 8x8 phone system is kind of invisible because it just works,” he says. “It’s amazing how few problems we have and how few devices have failed. 8x8 is exceedingly reliable—no care or feeding required!”

Locations:
24 locations in and around Nashville, Tennessee

Learn from 8x8 experts and industry leaders how global cloud solutions from 8x8 can help your business and improve your customer service, all while saving you money and time.